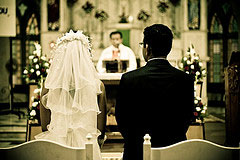 Ever since matrimonials went online, the matchmaking process has taken on a whole new dimension. A look at what it’s like for a man who has, rather unwillingly, been dragged into the spouse search process.

In a country in which there are only 940 women for every 1,000 men, the odds, statistically speaking, are against the men folk. As a man and having been witness to many failed relationships and marriages, I admit that quality among my kind can vary.

I am a single male in his 20s, working in Chennai, but hailing from God’s own country, Kerala. Like inhabitants of any Indian state, people in Kerala take to weddings with passion. Unfortunately, Kerala also arguably has the distinction of being one of the most materialistically driven states in the country. (Look at all those jewelry ads and the numerous chains of jewelry stores originating from the state.)

What has prompted me to think about gender ratios and weddings? Well, I have had my profile listed in a few matrimonial sites, and there are quite a few things I can say based on my personal experience with the sites and the process.

It is understandable that parents may be concerned about their daughters’ financial well being. These may be uncertain economic times. Still, the best one can do is to educate one’s offspring to survive and become responsible in managing an economy of their own.

And just as the success of a business merger depends on the culture compatibility of the two entities, the same goes with marriages. Culture here does not have to be one’s caste, creed, or religion. Can two individuals actually marry on the basis of just their economic status or their sectarian backgrounds and expect to have successful marriages? Wouldn’t you rather have two individuals who are able to think more or less on the same lines and complement each other?

Indian Girl: Still Single and Spirited
A Marriage With No Dowry
Comment