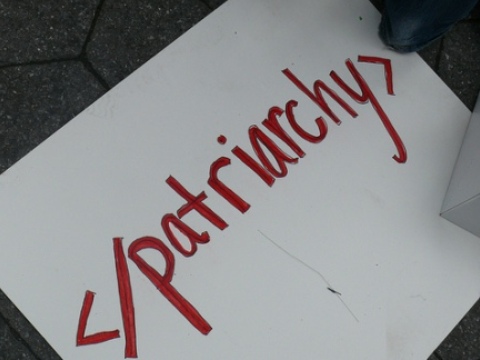 My mind is weary as my words try to bottle the meaning of feminism in their definitive confines.  What is feminism?  This question is asked, explored and answered in myriad ways but in vain.  Why is there so much debate and dispute surrounding this issue is the lesser asked question.  In 1949, Simone de Beauvoir wrote, “It has been popular in recent years to laugh at feminism as one of history’s dirty jokes: to pity, sniggering, those old-fashioned feminists who fought for women’s rights to higher education, careers, the vote.”  And it stands true to this day as we see posts on social media filled with mockery that would misguide an audience who is not aware of what the feminist movement roots for.  Many people find it hard to comprehend the ideas upon which feminism is founded and some are unclear about the relevance of the feminist movement in the current context.

Revisiting history, we would find that feminism began as a political movement in the late 19th century.  The feminist movement is popularly chronicled into three waves.  This tripartition of the movement is due to the different sets of ideas pertaining to each wave.  The first wave of feminism originated in the late 19th century and extended into the early twentieth century and it sought the right to vote for women.  While it is true that it started as a political movement, it also questioned the place of women in the society and the public sphere.  This influenced the second wave of feminism which covered the movements and debates that occurred in the 1960s and 1970s.  The horizon of issues debated was broadened in second-wave feminism.  Economic, cultural and political inequalities that women were subjected to were called into question.  The women’s liberation movement of the 1960s campaigned for legal and social rights for women.

Some issues that dominated the discourse of the second wave are pertinent to the unresolved problems of the present.  With the slogan “The Personal is Political,” problems such as abortion rights, child care, division of household labor, marital rape and domestic abuse were seen as private concerns and weren’t weighed as important in the public sphere.  Bringing these issues to light of the political sphere was considered important as women now had equal recognition in the public sphere.  Here, I would like to highlight the fact that women weren’t regarded as citizens in the Greek civilization, which was the cradle of democracy.  Thus, having no rights or representation for themselves in a democracy, their lives were shelved to the private sphere and all the problems that plagued the private sphere were belittled.  The second-wave feminist movement attempted to give women an equal footing as men in the public sphere.

Simone de Beauvoir in The Second Sex explored the essentiality of a woman: Who is a woman or what does it mean to be one?  Scrutinizing the gender roles that dominate the patriarchal society that we live in, the third wave of feminism was a backlash against the initiatives of the second wave which patronized femininity (in turn reinforcing gender roles).  The third-wave feminist movement started in the 1990s and it is significant to the current circumstance.  Gender roles and sexism were the major issues that third-wave feminism contended with. While sex is biologically determined, gender is socially conditioned.  Speaking of gender roles, I recently came upon a Women’s Day post on Facebook which sounded more like a Mother’s Day post as it equated the importance of a woman to being able to procreate.  As the third-wave feminists see it, motherhood is just one of the many roles that a woman is required to fit herself into.  The social construction of what a woman should be in opposition to the expectation of what a man should be is the concept of gender that is deeply rooted in a sexist society.  The evolution of the feminist movement has shifted the center of the feminist thought from being a movement for women’s suffrage and their representation in the political sphere to a movement that stands for gender equality.  The indisputable change of the core doctrine of feminist thought has led to a lot of commotion in the process of understanding feminism.

I’ve been often questioned why a movement for gender equality should carry the name of “feminism” when feminism was a movement originally started for the representation and reformation of women’s rights.  One way to answer this question is to point out how the ideology which our society is based on evolves with time and so do the social structures of power.  In the face of modernity, we live in a society that expects individuals to shape their own lives while satisfying the social expectations.  In the Indian context, women are still hindered from making their own choices and choosing their own ways of life.  Despite the long protests for securing equality of sexes and altering gender-biased laws, women are still viewed as inherently guilty when it comes to rape.  Feminism does not blame men for these injustices.  Rather, we are responsible for the sexism that surrounds us and feminism calls for a restructuring of the patriarchal order of the society.  The Nigerian feminist writer, Chimamanda Ngozi Adichie said that we are all social beings, that we internalize our ideas from socialization and are influenced by the social structure that is imposed on us.  From a sexist society, we would only imbibe sexist notions of gender, which impedes the formation of our identity outside of the male/female gender binary.  It is not uncommon to be asked, “Why should feminism focus on gender equality instead of human rights if it aims to secure equality for all?” I would say that it is the socially constructed concept of gender that: (a) has hindered women from establishing their space in the public realm, (b) has caused men to succumb to the shortcomings of patriarchy, and (c) has not allowed the sexual identity of many individuals to be recognized.  The problem of gender needs to be acknowledged in order to be removed.  The world that we live in has transcended some of the worst forms of oppression, such as slavery and racial discrimination, and it is high time that we transcend gender discrimination.

Our civilization and culture has evolved over time and we live a life entirely different from the times in which the pioneers of our culture lived, but it is disheartening to note that our ideas of gender have not evolved.  The feminist movement is still relevant and we need feminism to remove the sexist ideas that have perpetuated our world.  We’ve come across people who claim that they support gender equality but not feminism.  The major cause of this conundrum is that modern feminism is often conflated with certain movements from second-wave feminism which gives a misconceived notion of feminists as women who hate men.  And yes, there are men who adhere to the ideas of feminism and women who propagate sexism.  At the end of the day, when we ask ourselves, “What makes a feminist?” it would suffice to quote the feminist writer Adichie who said, “A feminist is anyone who recognizes a problem with gender.”  The meaning of feminism should not be derived from the context in which it began; rather it should be seen in terms of what it has become and what it now stands for.

In India, feminism is often perceived as an influence of the West. However, it’s a direct response to various issues affecting many Indian women to this day. Read more here: Feminism in India.

In Defense of Indian English: Why Prepone is a Pukka Word
Indian Wedding Etiquette: Advice for Guests on Invitations, Gifts, Dress Code and More
Comment