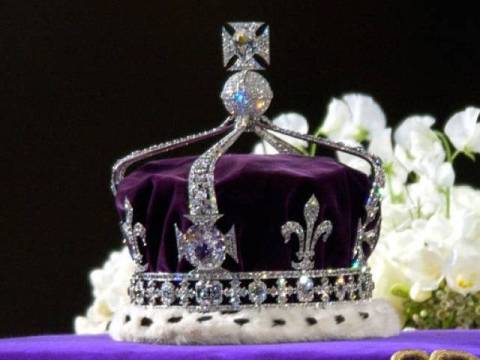 One of the most valued jewels in the world, the Kohinoor is widely believed to have originated in the Kollur mine in Guntur, India, in the 13th century CE, during the reign of the Kakatiya dynasty of Warangal.  Historical evidence shows that the diamond weighed 793 carats, uncut.  Since then, it passed many hands and traveled thousands of miles before arriving at its current residence in the Tower of London, in the United Kingdom.

With the #Brexit 2016 EU referendum results out, it is now official that Britain will be exiting the European Union.  If the citizens of the UK have a say in choosing what they believe is the right path, whether to exit or remain in the EU, may we suggest another exit/remain vote?

Here in India, we have a strong case for the Kohinoor to exit Britain and return to India.

Controversies, myths, and stories of curses have followed the Kohinoor to London, leaving a bloody trail across history.  When the southern kingdom of the Kakatiyas was raided by Alaud-din Khilji of the Delhi Sultanate in the early 14th century, the diamond was brought to Delhi. It remained with succeeding dynasties of the Delhi Sultanate until Babar, the Turco-Mongol warlord who defeated Ibrahim Lodi of the Lodi dynasty (in 1526) and founded the Mughal empire. The Mughals were in possession of the diamond for over two hundred years, with Shah Jahan even embedding it into his Peacock Throne.  Shah Jahan’s successor, Aurangzeb, wanted the stone reduced in size and entrusted a Venetian gem-cutter with the task.  However, a botched job greatly reduced the diamond’s size from 793 to 186 carats.

Shortly after invading Delhi in 1739, the Persian king Nadir Shah raided the Mughal Empire’s treasury and took the diamond back to Persia.  It is he who is credited with giving it the name Koh-i-Noor, meaning Mountain of Light. When Nadir Shah was assassinated, the Kohinoor traveled to Afghanistan with Ahmad Shah Durrani, Nadir Shah’s general. It came in the possession of Maharaja Ranjit Singh in 1813, when one of Durrani’s descendents fled Afghanistan and sought refuge in Lahore and agreed to hand the diamond to the Maharaja in return to his hospitality. In the Anglo-Sikh war of 1849, the Kohinoor was taken by the British, as a spoil of war, although they claim that it was gifted to the Queen of England by Duleep Singh, Ranjit Singh’s youngest, pre-teen son.

To remove a glaring flaw and to improve its shine, the diamond underwent another reduction in size in 1852, to its present size of 105.6 carats. And shine it does!

Legend says that the one who is in possession of the Kohinoor will own the world but also that it will bring bad luck to any man who chooses to wear it. Fearful of this myth surrounding the Kohinoor, Queen Victoria instructs in her will that the Kohinoor should only be worn by queens.

Following India’s independence from Britain in 1947, various Indian governments have demanded that the Kohinoor be returned to India.  However, the UK has rejected the claims and continues to maintain its ownership over the Kohinoor.  When asked, on a visit to India in 2010, about returning the diamond, David Cameron, Britain’s prime minister, said, “If you say yes to one, you suddenly find the British Museum would be empty.”

Well, so be it, if said museum is stockpiled with loot.

As recently as April 2016, the question of Kohinoor’s ownership made its way to India’s Supreme Court, which accepted the view that the diamond was not forcibly taken by the British but willingly gifted to them by Maharaja Duleep Singh.

Our view is that political considerations may have played a part in the Indian government’s being at peace with that view.  It may be prioritizing rightly in doing more to gain entry into the Nuclear Suppliers Group than to regain a lost diamond.

Still, we can’t but help insist that #KohinoorExitFromBritain.

While some government officials are backing Britain’s claim over the Kohinoor, some others are embarking upon road trips across the US.  Read about it here: 25 Other “Exploratory” Scenic Drives Nitin Gadkari Could Take In The US.

How to become an IAS officer and what the responsibilities and perks are
Tasted all these 13 types of Indian flatbreads?
Comment