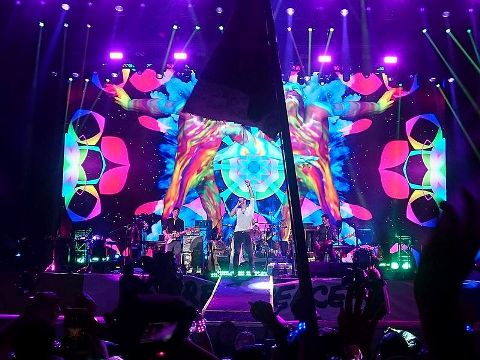 With 80 million records sold and seven Grammy Awards to their name, Coldplay is one of the most successful rock bands of this generation.  The band’s being scheduled to perform in India in November 2016 became a trending topic on the internet just minutes after Google India announced it recently on Twitter.  Even though the band had not made an official statement regarding their tour then, social media was ablaze with the news.

Now, many big names in the international music circuit have performed in India before.  Legendary rocks bands such as Beatles and Led Zeppelin performed in India in the ’60s and ’70s.  Bon Jovi, Deep Purple, and Slash toured India in the mid ’90s. In subsequent years,  rock giants such as Rolling Stones, Sting, Iron Maiden, Scorpions, Lamb of God, Mutemath, Guns and Roses, Poets of the Fall, and Opeth and thrash metal bands such as Megadeth and Metallica have also graced Indian shores.  With the rise of electronic music, Swedish House Mafia, Afrojack, Avicii, Hardwell, David Guetta, and Armin Van Buuren, among many others, have pulled off successful music shows in India.

Yet, it seems to be the first time that a foreign music band is getting as much attention and social media coverage is Coldplay getting.  That said, it got me thinking about how infrequent the performances by international music personalities have been in India.  The number of international live music concerts in India is significantly lesser than that in other Asian cities such as Tokyo, Shanghai, Malaysia, Singapore, and Seoul.  There is surely no shortage of fans here.  After all, you have even as celebrated an author as Ken Follett touring India (“the market of the future”) to promote a new book, simply because there are twice as many people in India than in England for whom English is the first language.

One deterrent to musical concerts, though, may be the shortage of performance-worthy venues that match up to international standards.  Also, because of lower-priced tickets, the revenue opportunities for the bands are also limited.  In addition to these issues, the perception of security risks and insufficient support from government authorities tend to discourage many mainstream as well as indie international bands from performing in India.

Until the tide turns or, well, just as part of “Coldplay is coming!” fever, here are videos of 10 great foreign music concerts that happened in India.

Music lovers of the land, rejoice!


After a 2o-year wait, Guns N’ Roses, the legendary rock band, held their first concert in India in Leisure Valley, Gurgaon.  They played crowd-pleasers such as Sweet Child O’ Mine and classics such as Mr. Brownstone and Paradise City.

Almost every 90s kid knows Carlos Santana, the guitar god.  The video above is from the Formula One Rocks Concert in Delhi where he wooed the crowd with his performance.

With more than 50,000 fans fans singing For Whom the Bell Tolls in unison, Metallica’s concert in Bangalore was nothing short of magical.

In 1996, Yanni performed live for three days at the Taj Mahal, Agra.  This performance became Part I of his live video album called Tribute.

The Scorpions performed in Mumbai in 2008 as part of their Humanity Tour to promote their album Humanity Hour.  They played all-time favorites such as Wind of Change and Rock You Like a Hurricane, making the crowd go crazy.

Davis Guetta is said to have stolen the show at Sunburn Goa, 2015.  His love for Indian fans keeps him coming back and their love for him is evident in the way they sang along to hits such as Titanium.  This was his fourth performance in India.


This American thrash metal band performed live in Shillong at the NH7 Weekender despite objections from local religious bodies.  The support shown by their fans and organizers resulted in a memorable night for everybody present.


Korn’s concert in Gurgaon was well-received by a very enthusiastic metalhead audience who could not help but head-bang to their favorite numbers.

Alternative rock band Mutemath played at Blue Frog, the live performance venue in Mumbai in 2013.  This popular American band stole their Indian audience’s hearts with their performances in Mumbai and, subsequently, in Delhi as well, as part of Bacardi NH7 Weekender, 2013.

Even though there was a clash between the cops and the organizers at this event, the crowd from Pune will never forget Enrique’s rendition of I’m Loving You, Bailamos, Escape, Dirty Dancing, and Just Wanna Be With You among others.