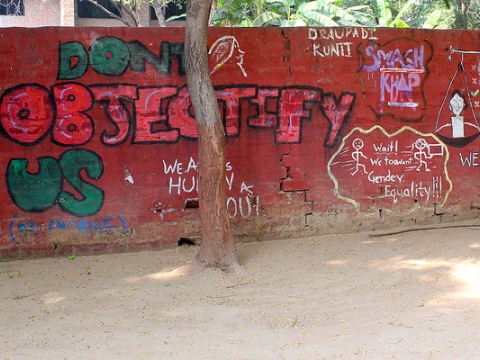 In a country plagued by identity politics, it is not easy to unite the concerns of the feminist movement.  The Indian identity is a complex one; carved from the infinite digressions of various sub-identities.  Evidently, this makes the experiences of two individuals from different social backgrounds dissimilar, despite belonging to the same gender.  This is the problem of intersectionality.  In the end, people’s immediate concerns do not match.  If this is the case, how can feminism be applicable to a diverse social group?

Ultimately, there is no one idea of feminism that will hold true for all, considering the myriad socio-cultural scenario in India.  Historically, women in India have been subordinated in the public domain as a result of the dominating patriarchal structure, which is tinted with casteism and religious fundamentalism.  These cultural constructs have taken away the space for women in the participation of developing the society.

Being a feminist in a country like India is challenging because the issues surrounding gender equality in India are different from those faced by our western counterparts.  Yet, the feminist movement in India commenced with the efforts of men who sought to extinguish the custom of sati, child marriage and the social exclusion of widows.  The social reform movements of the late 19th century are often linked to the influence of the colonial empire in India.  It can be inferred that the colonial critique of Indian culture induced the social reform movements to a great extent.  As a result, feminist movements are often perceived as an influence of Western culture.  Feminism has been flagged as being anti-national, for allegedly attacking the traditions of our country.

At this point, many would pause to ask themselves if feminism is necessary for a non-western country where the feminist ideology knows no origin.  But the need for equality in all spheres of life has propelled Indian women to internalize the feminist ideology and use it in the Indian context.  Nonetheless, it is not entirely an influence of the West.  As Uma Narayan, feminist scholar and Professor of Philosophy at Vassar College remarks, “Third-World feminism is not a mindless mimicking of ‘Western agendas’ in one clear and simple sense […] Indian feminism is clearly a response to issues specifically confronting many Indian women.”

Since the pre-independence era, women have participated in the nationalist movements in order to liberate themselves from the confines of the private sphere and to voice their presence in the growing political scenario of the late-19th and early-20th century.  In other words, there was a need to bring the problems faced by women, which were usually confined to the private sphere, to the light of the public sphere.  Issues such as rape and domestic violence began to be reported and women empowerment started receiving increased awareness. Along with the protection of women’s rights offered by the state, the establishment of organizations that echo feminist concerns and support women’s movement have helped in empowering more Indian women.  Coinciding with first-wave feminist movement across the world, women’s movement in the pre-independence era constituted the first wave of feminism in India.

Victimized by tradition and culture, women sought compensation in education and restructuring of the social norms.  With the inception of independence, an egalitarian democracy was conceived.  The image of such a society dissipated when the violence against women reached dizzying heights in the form of rapes, honor killings, and dowry deaths.  In the 1960s and 1970s, there was a surge in women’s movements which resulted in transforming the social structure from within.  Prior to independence, the gendered division in the labor force was accepted.  These inequalities were challenged by feminists in the ’70s, and class-consciousness came into focus.  As the changes picked up pace, the state supported women’s causes by altering laws to ensure protection. But of what use are laws on paper if they are not enforced appropriately?

Today, the women’s movement in India has become autonomous and decentralized with various organisations sprouting up in the urban, as well as in the rural areas of the country.  We need equality not just in the promising words of the constitution, but also in practice.  In the contemporary context, feminism has transcended the intangible yet treacherous gender divide in India and has included the concerns of women who are at a greater disadvantage due to their caste, language, religion, and tribe.  In a country where rape victims are still shamed and women who dare to live life differently are demoralized, feminism still has a long way to go.

If you are interested in feminism, these other articles on our blog might interest you: The Evolution of Feminism and Feminism and the Institution of Marriage.

Temple Wedding Venues in India: 12 Destinations to Consider for a Soul-Stirring Ceremony
In Defense of Indian English: Why Prepone is a Pukka Word
Comment

10 Signs That You are in Love