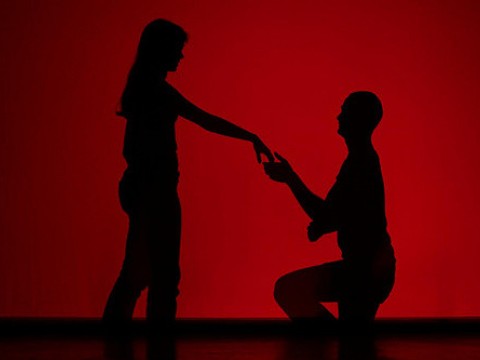 When the love of your life drops down on one knee and professes his undying love for you, wouldn’t you want that recorded on tape?  Try not to tear up as you watch these beautiful wedding proposal videos curated from YouTube.   Spoiler alert: Watch the videos before reading the corresponding writeups.

Video #1. On the streets of London

What would you do if a man dressed as Shrek stops you on a street and asks to talk to you for three minutes?  Well, Tina stopped to listen.  However, little did she know that the guy in the costume was her loved one, asking her to spend the rest of her life with him.  And of course, she said yes!  Tina’s eyes start welling with tears when she realizes that its her love story that the guy on the street is narrating.  Finally, Shins, the guy in the mask, pulls it off right before pulling the ring out.  Watch this wedding proposal video to see the whirlwind of emotions that appear on Tina’s face.

‘Bhangra in the middle of a park? Why not?’, thought Gary.  He arranged dholis and dancers to add some Punjabi flair to his surprise wedding proposal, and by the look on Mandy’s face, Gary totally nailed it.

Video #3. Anything for their coach

The students of this school went the extra mile to set up a performance proposal for their favorite coach.  The dance routine that the cheerleaders and basketball jocks chose is hilarious!  The coach’s girlfriend is given long-stemmed roses by the students amidst the performance, at the end of which the coach makes his appearance.  He gets down on one knee and pops the question.  His students’ elation when their coach’s girlfriend says yes makes this wedding proposal video all the more entertaining.

When his girlfriend playfully complained that he never proposed to her officially, this guy decided to make it one big memorable wedding proposal.  He hired a dance group, practiced with them for hours, and successfully pulled off a flash mob in the atrium of a mall Chandigarh.  In addition to the parents of the couple and the couple’s friends, more than a thousand shoppers witnessed Arsh Singh getting down on one knee and declaring his love to his girlfriend.

Video #5. Wedding proposal in a song

This guy composes a song for his girlfriend and goes on to sing it on stage while she’s by his side.  To her surprise, there is a wedding proposal incorporated towards the end of it.  The crowd cheers as he kneels down on stage and takes the ring out.

This is some serious effort, I must say.  This guy named Matt went out of his way to record him asking his girlfriend’s father’s permission to marry her.   Wait, it gets better!  He plays it as a movie trailer at the cinema hall, much to his girlfriend’s surprise.  This wedding proposal video also captures his drive to the cinema hall.  Just as Matt-on-the-big-screen enters the hall, the real Matt walks in, gets down on one knee, and proposes to her!

Planning on proposing to your loved one soon? Read Wedding Proposal Ideas to Surprise Your Girlfriend.

10 Indian Gestures and Their Meanings
Sex and the Indian: Importance of Sex Education and Safe Sex
Comment