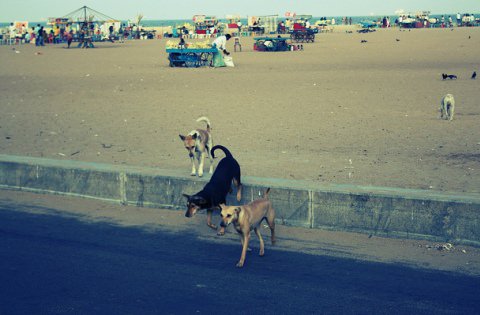 In India, you don’t have to visit a zoo to see a variety of animals.  Why?  Because you can spot them on roads, existing peacefully alongside vehicles.  Take a look.

Of course, it has to be the first animal you associate with India.  We worship cows, don’t honk at them, let them sit wherever they choose to and whenever they want to.  We even touch its butt for good luck every time we pass one.  But god forbid you are mean to it.  Literally.  Do you really want to be born as a cow and be abused in your next life?  Think about it.  Cownt your blessings before you do.

While it’s known that Indians look out for gothram a lot, it’s perhaps a lesser known fact that they have to look out for goats while on the road as well.  No one really knows who owns these goats, but they sure own the road.  They scatter when you honk at them, but not before giving you a tough time while they make up their mind about which way to go.  And pedestrians pose a constant threat, so they often ram into them (ram is a pun on sheep, damn).

One of the perfect examples of evolution you can see is the Indian street dog.  Born to survive, these hardy mutts are often better than humans at crossing chaotic Indian roads.  Since they are cute, many a roadside eater has given in to them looking up at him/her with their huge puppy eyes.  They’re experts at scavenging food from seemingly nowhere and love to chase cars and two-wheelers after dark.

Rarely seen openly lounging around, the felines stick to shady places in the day avoiding the brunt of the heat, and cry out in the night to keep people awake.  They are good at stealing food from humans.  So, they tend to be better fed.  They also hunt pigeons and what not.

Deer are a rare sight, spotted only on highways going through their habitat.  They’re protected, and hunting them takes quite a few bucks out of your pocket (pun intended).  Some human found out the hard way, we hear.

Though not found throughout the country, they’re a relatively common sight in Rajasthan, the place of Kings, where they’re indispensable for transport across the sands of the Thar.  They’re pretty much used as substitutes for cows—milked, herded, and slaughtered for food.

Elephants can be seen on the roads in most parts of India.  They can be seen in many temples, decked up for festivals and processions.  Or if you’re venturing into forested areas, you’ll see herd of elephants crossing roads. On occasion, you may even spot the notorious lone tusker.

Monkeys are a rather common sight in India, especially in temples, where they’re seen as incarnations of the God Hanuman.  But they can also be seen on roads near forested areas, sometimes even in cities.

These are always a fascinating sight to see.  Apart from their ceremonial use at weddings, when the groom arrives on horseback, they’re used for pulling carts and carriages as well.  The officers of the law use them as well.  They’re a familiar sight on beaches too, giving rides for a small fee.

Donkeys are frequently seen on Indian roads, carrying heavy loads especially near market places.  For traveling markets, donkeys are the means of transporting goods from one place to another.

India has long held the reputation of being an exotic place, mostly due to the Western concept of the Orient. Read Debunking Stereotypes About India to know more.

What It Takes to Have a Top-Tier US Business School Named After You
#NeverForget? 11 Major Terror Attacks in India Since 1991. How We Forget!
Comment