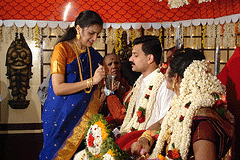 Malayalees are so prolific that the hash tag “BeingMallu” was a Top 5 worldwide trend on Twitter recently. Despite the many tea shop jokes, the Malayalee Hindu ceremony makes a wedding look easy.

There are wedding rituals that occupy a family for a week, and then there is the Hindu Malayalee ceremony: Blink and you will miss it!

The ceremony incorporates only the most basic rituals. (The origins of the non-Namboodiri ceremony, if you will, lie in the social revolution led by Sree Narayana Guru.) Chances are, if you’re running late, you’ll be in time for the sadya and not the thalikettu. So, for a guest at a Malayalee ceremony, punctuality is essential!

In case you missed parts of it as a guest, or want to understand all of the next one that you attend, here is our guide to a Hindu mallu wedding.

On the morning of her wedding, the bride, dressed in a simple mundu-neriyadu, visits her family temple and makes a ritual offering, invoking the blessings of the gods watching over her and her loved ones.

Dakshina (thanks or gift)

Following her visit to the temple, the bride offers a simple dakshina – a betel leaf, areca nut and one rupee – to the elders of the family, including her older siblings and cousins and takes their blessings. Following the dakshina ceremony, the bride’s party goes to the mandapam (hooded, decorated canopy under which a wedding takes place). Sometimes the dakshina ceremony is held the night before the wedding. 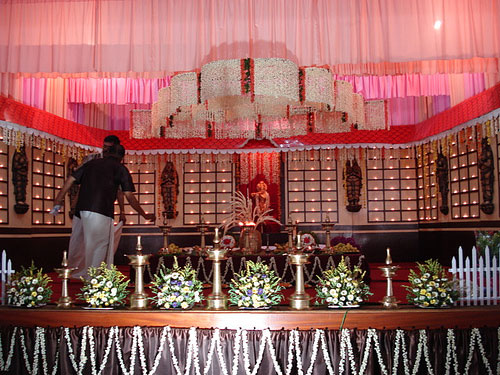 A para (vessel) is filled to the brim and overflowing (nirapara). This small but significant ritual is performed before the bride or groom enters the mandapam. Married women from the bride’s family are invited to fill the para with handfuls of wheat, with each handful representing the goodwill and prosperity wished for by the elders of the family. Once filled, a branch of coconut flowers is placed atop the wheat. The nirapara is surrounded by three vilakkus (lamps) and a traditional tambulam (betel nuts with spices) is placed next to the lamps, as is a photo of the family deity or spiritual leader.

The bride, dressed in her wedding finery – yes, including copious amounts of yellow gold – makes her way to the mandapam with her maternal uncle escorting her. She carries the ashta mangalam – the eight essential items needed for a wedding ceremony – with her.

Thalikettu (tying of the knot)

Horoscopes and timing are an essential part of Malayalee wedding culture. The time for the muhurtam/thalikettu is fixed beforehand and it is important that the time is adhered to. Once the bride and groom are seated on the mandapam, the groom is given the thali(necklace). The pendant is shaped like the leaf of the banyan tree (this varies from region to region, but the most common shape is the banyan leaf). The groom places the thaliaround the bride’s neck and his sister (or cousin) ties the thali.

Kanya daanam (giving away of the daughter)

The bride’s father places the bride’s hand over the grooms and solemnizes the wedding. After this, the couple walks around the mandapam’s periphery thrice.

After the couple’s wedding ceremonies are done, the bride and groom’s immediate family offers them a spoonful of sweetened milk and bananas. This is sometimes done after the bride enters her married home.

The sadya,or meal, is the most important part of the celebrations. It is only after eating the food from the wedding sadya that the bride and groom can leave.

Following their meal, the bride and groom depart from the mandapam. At the groom’s house, the bride is given a vilakku and she enters her new home, as the bringer of prosperity, putting her right foot forward first.

Have you ever been to a Tamil Brahmin wedding, but didn’t know what the rituals were about?  Here’s a guide: Tamil Brahmin Wedding Ceremony.

Paean to an Indian Wedding
Bachelors We Don’t Want to Let Go of!
Comment

How To Get a Girlfriend: Tips for Single Men Who May Need Them