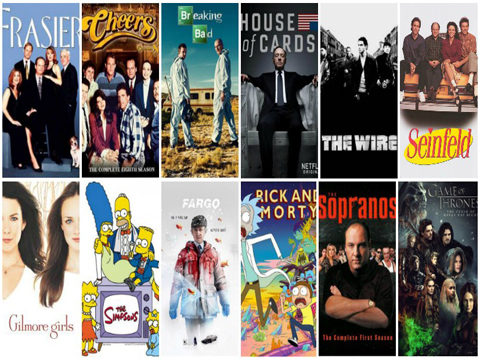 Hold your horses, we know Friends is a great show.  Before you shove Joey and Chandler down my throat, let me tell you  that I love Friends, too.  It’s a hilarious show with characters that many of us who grew up in the ’90s can relate to.  However, that does not make it the best show of all time (as some believe) or even the best sitcom.  Here is a list of some great TV shows that we think you should watch – with an open mind! – if you think that Friends is the best thing to have ever aired on TV.

This dark, gritty black comedy (I like to think it’s a laugh at life) revolves around a high-school chemistry teacher diagnosed with cancer, who tries to ensure his family is well provided for before his imminent death.  He starts manufacturing chemically pure methamphetamine with his superior knowledge.

This fascinating political drama follows a power-hungry United States Congressman and his wife who scheme and manipulate their way to higher political office.

This animated adult comedy is sure to give you rib-tickling laughter as well as a serving as a microcosm for humanity and the problems of families and teenagers alike.

This show deals with the problems Tony Soprano faces in his personal life as well as his professional life as a mob boss.

Several noble families fight it out for the Iron Throne in the mythical land of Westeros, while a race of the undead gather to wage war against all of humanity.

This satirical take on everything is a show packed with pop culture references enough to fill several tabloids for years.  It features a dysfunctional family in the imaginary town of Springfield.  The show also has uncannily predicted some rather unprecedented things such as Donald Trump’s running for President.

Following the drug scene in Baltimore from both sides of the conflict, with drug dealers as well as law enforcement, The Wire has a devoted fan base that is ever growing thanks to its popularity as one of the best TV shows of all time.  Case in point: The above fan-made video trailer for the show.

Arguably the best sitcom of all time, featuring stand-up comedian Jerry Seinfeld as himself, the show follows him and his neurotic group of friends as they go about life in New York.  Often called “a show about nothing” because the entire plot revolves around everyday, mundane life.

Based on the Coen brothers’ movie of the same name, Fargo narrates seemingly unrelated tales of betrayal and murder that mysteriously lead back to the one incident at Fargo in North Dakota.  Each season follows an anthology format, being set in a different era along with a different story, cast, and set of characters.

Named after its lead character, Dr. Frasier Crane, this show follows his life as a radio psychiatrist after he moves back to his hometown of Seattle.

The regulars of the Boston bar Cheers share their experiences and lives with each other while drinking or working at “the bar where everybody knows your name.”

Set in the fictional town of Stars Hollow, Gilmore Girls follows the life of a single mother Lorelai Gilmore and her daughter Rory.  It is a moving commentary on society, love, and life.

Also, check out our list of top 10 alien films: Movies That Sum Up Stephen Hawking’s Warning.

If You Tend to Eat Out, Watch Out for These Tricks that Restaurants Play!
As Zika Virus Nears India, Know the Symptoms, Risks, and Ways to Prevent its Spread
Comment