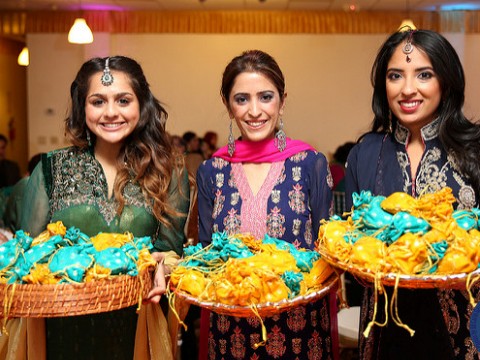 1. The photographer, a.k.a. the stalker

There’s the team of wedding photographers who seem to be everywhere—at the reception desk where the guests have their faces zoomed in, at the stage where the bride and groom are seated, and everywhere else capturing every twitch, giggle, and nudge.  Neither the guests caught unawares while helping themselves to the banquet spread nor the banana leaves are spared by the shutterbugs.

The key to the bride’s room are more than what meets the eye; it is a symbol of power.  The mami or chachi who holds it practically controls half the wedding.

3. The foodies who analyze and criticize what’s on the plate

You thought Zomato was the only platform for food critics?  Rewind.  There are those foodies at weddings, whose verdicts make or break the wedding.  Want to be certified by them?  The food better not be anything short of scrumptious.

4. The cousin who takes more time to get ready than the bride herself

There’s that cousin who simply wouldn’t be able to decide if her dupatta should be placed on the right shoulder or on the left shoulder.  Or, if its a guy,  whether he should wear a blue waistcoat or a black blazer.  After much ado about the outfit, they might step out and not get a single head turning in their direction.

5. The hotly-contested spot beside the bride

The shortcut to be in the limelight at weddings is to grab that spot among the few women who are allowed to style the bride.  You get yourself in, amidst all the jostling, and you can be assured that the force will be with you.

That elite, exclusive circle of saree-gehna spotters can precisely point out the material, selling price, and actual value of a saree or a piece of jewelry in just one glance.  They know exactly how many carats or grams of precious stones or metals the bride’s necklaces and earrings make up.

7. The gang of matchmaking grandmothers

If there’s one thing everyone knows about Indian weddings, it’s the grandparents’ “I want to see you married before I die” sentiment.  What’s more?  Weddings seem to lead to more weddings.  All the men and women in the family seem to have got married to their respective wives and husbands only because some grandmother, with the able advice from her comrades, had carefully handpicked them at some other wedding.

As if smiling, greeting, and posing for pictures with every single one of the relatives and friends weren’t painful enough, the bride and groom are made to do the same with a bunch of people whom they barely know, who claim to be distant relatives or acquaintances of even the extended family!

Every kid at a wedding is bound to bump into some Auntyji or Uncleji who would go “Remember me?  The last time I saw you, you were crawling on all fours!”  That question is almost always followed by “Look how much you have grown!”  How does one even respond to that?

You thought a wedding would be a welcome change from all the advice you get at home?  You’ll realize that it’ll only get worse at weddings, because when your parents see that polite, straight-As-scoring niece or nephew, you can be sure that a “Look at him/her. Be like him/her” is about to come your way in under 3 seconds.

11. The kids who are pushed by their parents to get advice on JEE from the IITian cousin

As if all that cramming at “coaching” centers wasn’t enough, every kid is pushed by their parents to seek the advice and blessings of that cousin who successfully cleared the IIT-JEE.  Then they promptly ask their kids if they had absorbed everything that the cousin had to say, because, of course, it’s that 5-minute gyaan session that’s going to get you through.  Right?

Justification: “There are piles of return-gift bags at the reception desk.  It’s not like taking a couple of extras would deprive someone else of one, right?”

14. Kids who generously help themselves to toffees at the welcome table

Remember that moment when Air India’s stewardesses used to come around with a basket full of candies and the enthusiastic few among us would grab a handful?  It’s pretty normal to see that happening at the reception desks at weddings, with the coy relatives stationed there unable to do much when a kid takes a disproportionate share of the goodies. Tsk. Tsk.

Another common sight is a round-table discussion on who’s likely to win the next elections, who’s the most corrupt leader, whose career is going places and whose is not, who are the hottest eligible females at the wedding, and which Auntyjis tried setting them up with a daughter or niece.  There’s always that uncle who can dole out facts and statistics in a jiffy, leaving his audience either bowled over or furtively glancing their watches. A couple of raunchy Khushwant Singh-style bachelor jokes are sure to be heard from the groom’s friends and cousins.

16. Those awkward couple moments while posing for the wedding album

When the wedding album comes out with all its colorful photographs, everyone is overjoyed, but no one knows the pains behind the photo shoot better than the bride and the groom.  Be it for striking that awkward Titanic pose or for struggling to recreate that Tanu Weds Manu poster, they definitely deserve an award.

17. The car that is as decked up as the bride and the groom

In a drive to get everyone and everything decked up for the wedding, even cars are not spared.  While meters of colorful ribbons, heart-shaped pillows, and shiny stars and what-not are stuck on the car’s front and rear, some go the extra mile and even pimp up the headlights.

18. The matriarch who declares one’s clothing appropriate or inappropriate

Cries against moral policing will fall on deaf ears when the matriarch’s decree on the appropriateness of one’s clothes is passed.  If she twitches, that’s the cue to go back to the room and change into a more modest outfit.

The wedding season is the time of the year when everyone’s appetite for paan grows to insanely huge proportions.  There’s paan in every nook and corner and everyone’s mouth flows with rivers of betel juice.  This Pan Parag advertisement from the nineties, starring legends Shammi Kapoor and Ashok Kumar, will tell you exactly how paan masala is revered in an Indian wedding.