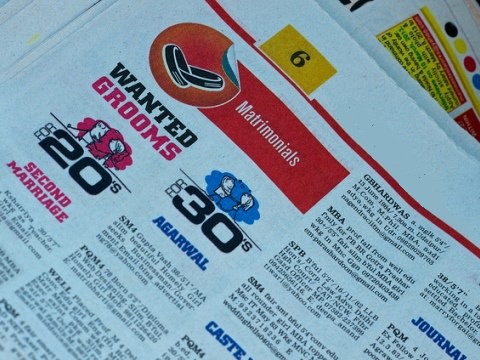 Times may be changing, but even with Indians also swiping away on modern matchmaking apps, you’d think that arranged marriages are a thing of the past.  Not quite!

They are not laughing matter either, as pop culture would have us believe.  Check out this video, for instance, in which a young woman’s family hosts parents of a young man, to discuss an alliance between the woman and the hotshot guy.

The tech-savvy potential bride, with the help of her resourceful brother, manages to get the real scoop on the potential groom – in real time – and chase the obnoxious visitors away.

Unfortunately, it doesn’t play out as hilariously for most single Indian women.  Many a potential bride has had to put up with a barrage of embarrassing questions and worse.  We wrote about this previously, as part of our Kalyanam Chronicles series (“Meet the Prospects“).

Take what some others have shared, online, about their ordeals once prospective grooms and their families showed up at their doorstep:

Let’s begin with Juneja Balla who had to undergo a foot inspection by her superstitious prospective mother-in-law (PMIL).  PMIL wanted to see if the alignment of the bride’s toes would bring bad luck to her son. After that, PMIL asked Juneja to change into a salwar kameez, because she thought that a saree didn’t look good on her, owing to her tall stature.

Parul Dixit, talks about how she was shocked out of her wits when the prospective groom’s father asked her to demonstrate her cooking skills by making a pappad right in front of them.  Prior to this bizarre demand, she was also quizzed on high-school math and social science by the groom’s sexist father.

Another young single woman was rejected for being left-handed as the boy’s parents did not want the possibility of their future grandchild being left-handed. According to them, such a child would be confused, growing up with a left-handed mother and a right-handed father. I’d venture to say that they’d be more confused growing up under the influence of such grandparents.

An outlandish explanation that prospective grooms’ parents give for declining many a proposal, despite matching horoscopes, is that many women these days wear eyeglasses, whether it is to correct nearsightedness or longsightedness.  Apparently, these common medical conditions are viewed as aberrations.  It makes you wonder who is the shortsighted person here.

Umpteen young women also recount experiences involving to-be in-laws demanding that they give up work and become a home-maker, but while requiring that they have maintained excellent grades through high school, college, and grad school.  Well, we know now what characterizes a trophy daughter-in-law!

Another would-be-mother in law insisted she and the potential bride go into a separate room so that the bride could strip and she could check whether the complexion on the bride’s face matched with the rest of her body.  The matron also wanted to be sure that the bride had no physical imperfections.  Imagine the horror!  The poor young woman was in tears, but at least her family did not waste time in ushering the other woman out.

Ranjani Mani, a Quora sister, recounts how the first talk she had with a potential guy over the phone turned out to be a total disaster, as the shy, inarticulate guy couldn’t even string words together into proper sentences.  Admittedly, “shy was coming” to him.

Then there are potential mothers-in-law who hand out lists of the things a bride is expected to bring along with her to her husband’s household.  They may readily acknowledge that asking for a dowry is not only shameful but also illegal.  Yet, they ask and rationalize the demand by believing only cash counts as dowry, while expensive home appliances or even cars don’t! One Quora user was handed a list that went like this: teapot, sofa set, dining table, water purifier, cooking-gas connection, refrigerator, washing machine, dishwasher, air conditioner, and so on.  Worse, the groom’s family justified the list by stating how they had to give away all those when they got their daughter married off a few years before.

Our hearts go out to all the women out there who have had to endure such experiences.  Take heart; there are good folks out there.  And many already recognize that Jodi365 is the right kind of platform on which to find like-minded, quality singles.