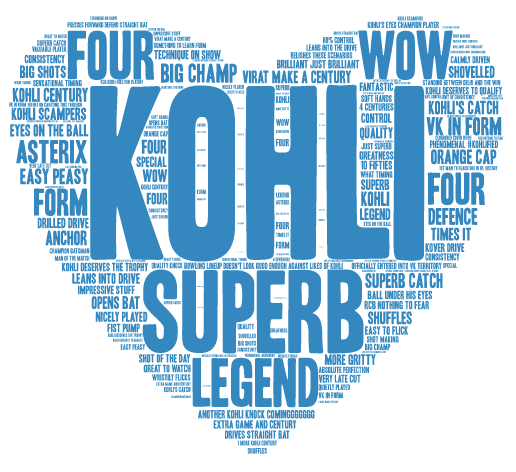 Part 1.
A love for the gentleman’s game

Like many boys growing up in India in the 80s, surely, I dreamed of playing for India.  I enjoyed opening the batting and Sunil Gavaskar was a boyhood idol.  I was about 12 then.  Of course, when it became obvious, within a couple of years, that if I had to get anywhere in life, it would not be because of any world-class hand-eye coordination or skills with a bat, my life’s path took another course, away from the world of sports.

Still, the affliction had not entirely left me.

I got to watch India’s nail-biting 1987 World Cup opener against Australia at Chennai’s Chepauk stadium, and I still remember the pervasive sense of gloom when Graham Gooch’s England swept us out of the semi-finals.

In subsequent years, as competitive as college was, academically, I was not above going late to class occasionally, just so that I could linger in my hostel’s common room and take in more of an ongoing cricket match.

I enjoyed playing cricket regularly at IIT-Madras, at the inter-hostel level – 30-overs-a-side affairs on matted wickets – and even earned a call-up to open the batting for the Institute team at the inter-university level.

An enduring memory from that tournament is of sweetly timing a fast bowler’s ball through midwicket for a boundary, only to have my stumps shattered by the next ball.  I haven’t admitted this to anyone before: That delivery came in so quickly that I don’t recall seeing the ball rushing in between bat and pad.

It is just as well that I was more into weightlifting by then – it was hard to haul heavy barbells overhead, but at least I could see the damn things move, when they would indeed move.  I also had the sense to remind myself that I was at best an athletic student, with only occasional delusions of a professional career in sports.

The love for cricket, however, persisted, even as I relocated to the US, by the mid-1990s, for graduate studies.  Those were the early days of the Internet and Cricinfo.com was new on the scene.  It was an easy way, especially for those of us stats-obsessed cricket fanatics, to follow live scores from the convenience of our workstations.  To think that barely 15 years earlier, the only available option at times (as when India played in the West Indies) was to follow All India Radio’s audio commentary on a handheld transistor radio.  (I feel ancient just typing transistor radio.  When was the last time you used that in a sentence, if at all?)

Old habits die hard, and to this day I continue to visit the site to follow Indian cricket.  It’s a sobering thought as I estimate how much time I may have spent following live scorecard updates over the last 20 years – across Iowa City, Ann Arbor, Seattle, Chicago, and Chennai, without counting site visits while on the road. Cricinfo may have changed hands a few times, but adding to my abiding sense of loyalty is the fact one of its co-founders, Badri Seshadri, was a kind college senior and hostelmate.

The procrastinator in me should be grateful that my passion for cricket has dimmed with time.  It has also helped to be able to see professional cricket today, thanks to the dogged matchfixing and spotfixing scandals and the huge monies at stake in the sport, more as WWE-style entertainment.

But watch I still do, occasionally.

After all, cricket wasn’t just my love; it was my religion.  Unlike millions of others, though, many of whom would excitedly wave a sign, “Cricket Is My Religion and Tendulkar is My God,” Sachin Tendulkar wasn’t “God” to me.

He was just someone I admired, greatly, especially for the dignified way in which he conducted himself on the field and off.  When he would stride out to bat, carrying the dreams and expectations of millions of Indian cricket fans, those hopes would include mine.

Case in point: At the time of the 2003 India-Australia World Cup final, I was excited to be able to take in a live telecast, through the night, at a Kiwi sports bar near my apartment in Seattle.  With India set to chase a stiff target, my hopes for an India victory too rested on Tendulkar’s shoulders.  However, when he miscued a pull and got out in the very first over, I gave up and headed right home.  It was 4 a.m. and I didn’t fancy feeling both sleepy and depressed as I continued to watch.

Time catches up with all.  Even gods retire.  Tendulkar may be transitioning into the role of elder statesman, but fortunately a cricket-crazy country has not had to search far or long for another hero to worship.

Tendulkar’s heir apparent, Virat Kohli, has been on a hot streak in recent months.  Even more remarkable than the frequency and pace at which he has been racking up good scores and man-of-the-match awards, is how quickly he is being elevated to the role of demi-god.

Kohli may be cut from a cloth different from Tendulkar’s, yet I admire him too, for possibly being the best chaser of targets in the history of the game.  I also see him as being representative, for better or worse, of a new, confident—often brash—India. (Sourav Ganguly and his brazen, bare-chested decorum-be-damned celebration at Lord’s, may have been a harbinjer of things to come.)  Cricinfo puts it well when it introduces Kohli, in his player profile, as a typical modern-day cricketer who plays the game aggressively.

Indian cricketers in the past may have been as gifted as he and world-beaters in their own right, at least on their day.  However, not counting the outspoken Gavaskar, most of them were seemingly unwilling, for whatever complex cultural and sociological reasons, to stir the pot.  (Would sociologists like to chime in with their perspectives? and Guha-like historians with recollections of other spirited personalities?)  It brought to mind my own reflections, as a young professional in the US, on the “model minority” template and often wishing that I could just be myself, with all my virtues, warts, and edges, without feeling the need to be a walking, talking, always-on cultural ambassador or a model immigrant in someone else’s preferred worldview.

So, when someone like a Kohli comes along, with a decided edginess to his persona, I say, “Power to you!” 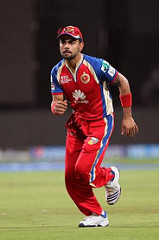 If you’ve read this far, I hope that these would figure in your takeaways: That I enjoy following cricket and admire, among others, Virat Kohli.

Now, wholesome enjoyment of a broadcast match requires quality input in the form of commentary from informed, perceptive minds.  It’s bad enough that the monopolistic bully that the BCCI is has not just silenced but effectively banished many a fine, objective, but not-sufficiently-pliable commentator from Indian airwaves. (#BringBackBhogle, anyone?)

Cricinfo and its team of feature writers – including a talented young man whose acquaintance I made through my wife’s friend – offered that kind of input, with wit to boot.  Instead of suffering, say, Ravi Shastri’s bombastic commentary and tired cliches , I could benefit from the wisdom of the crowd, often shared tongue-in-cheek by a swift-typing text commentary team.

However, Sunday night’s live text commentary on the IPL match between Royal Challengers Bangalore and Delhi Daredevils offered a different experience.  Far from objective reports on the match, what I got to digest were fanboyish hosannas.  Let’s look at the data.

Virat Kohli took strike for 45 balls, which meant that there were 45 lines of commentary in the RCB innings which began with “<Bowler X> to Kohli.”  Of those 45 sentences, as many 18 (40%) included glowing references to Kohli:

Another 18 were more matter-of-fact, as in “driven to long-off.”  Only one delivery shone the spotlight on someone other than Kohli:

One could argue that the commentary was only consistent with the data, which show that Kohli was in control of 86% of the deliveries he faced (39 of 45). 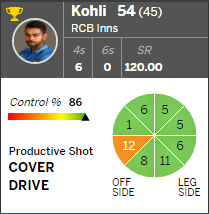 I take a different view, in light of the commentators’ choosing to share and thereby highlight 28 (!) fawning user comments in the space of about four hours.  Brace yourself as you read on.

At the start of the game:

This word cloud (created using references to Kohli in the commentary) sums it up: 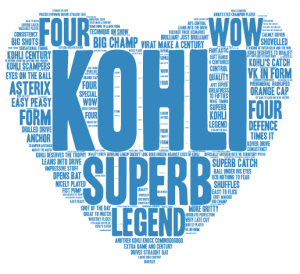 Feel free to call out, in our own comments section below, the Cricinfo comment that caused you to gag the most.  And to think that I logged on to check on the state of what was supposed to be a rare, meaningful IPL match out of 56 double-round-robin ones!

My take: At best, the commentators were fanboys themselves (“Wow”??  Seriously?!); worse, they were pandering to a hero-worshipping audience.

What makes me think that?  Because of the outsized focus on the cricketer, rather than the cricket, as in:

Please, Cricinfo, cut it out!  If you care about not annoying and alienating serious cricket fans, that is.  Ask yourself what you would rather be: A site that caters to cricket fans or to cricketers’ fans?  There is a difference.

If it is the former, please glorify the sport and cut out the puke-inducing glorification of routine sporting feats.  Yes, Kohli took a fine catch and played an impressive innings, but by extolling rather than objectively reporting on his performance, your commentary and the over-the-top comments resembled politicians’ sycophantic deification of their masters.  You’d do well to take a page from Richie Benaud’s stylebook of understated excitement?

Can we simply enjoy a game of cricket without deifying our cricketers, when they do well?  Or tearing them apart when they fare poorly?

The vile abuse of mean trolls, when you are down – and there will be ups and downs over the course of what I wish is a long, successful career – will probably be directly proportional to the lavish praise being heaped on you when you are at this high.  Continue to reach higher, but stay grounded!

While we are talking: Thanks for standing up for Anushka Sharma on social media recently and shaming trolls for unfairly piling on her.  You specifically stated no need for respect for the post, which spoke for itself. I can think of no better respect for your cricket than to let your bat – and not over-enthusiastic writers and comment moderators – do the talking.

It may be time now to tune out sports reports altogether.  Similar hyperbolic reports will continue to be churned out by the media every week.  Don’t believe us? Read: The Greatest Sports Critique Ever Published at 2.38 AM.