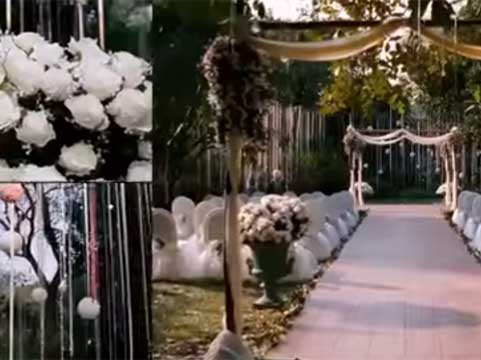 Weddings are grand affairs in most societies. Cinema, too, is undoubtedly a huge affair. If art indeed imitates life, then we are grateful for some evolved representations of weddings in Indian cinema.  It used to be that wedding scenes would inevitably feature a sentimental scene involving a bride’s crying while bidding farewell to her parents, before setting off for her new household.  What we have and showcase here are movies with cool, offbeat, and unforgettable weddings.

Apart from its picturesque settings and brilliant characters, ZNMD also has a beautiful destination wedding of sorts at the end. While the entire ceremony was performed to the catchy and symbolically placed Sooraj ki baahon mein number, the venue boasts of elaborate flower arrangements and other beautifications. Shot in a lovely European countryside kind-of-location, it turns out to be a dreamy, outdoor wedding worth re-creating in real life.

For several ’90s kids like me, Alaipayuthey is not only fresh in memory for its delightful music and the amazing chemistry between Madhavan and Shalini, but also for the wedding scene. Karthik and Shakti tying the knot in a temple in their friends’ presence marked the entry of a new era in the picturization of weddings in Tamil cinema. There’s no song-and-dance routine that follows the ceremony, only A.R. Rahman’s famous Maangalyam Thandunaneyna cover. The scene beautifully captures the daring spirits of two smitten youngsters, who decide to take things in their own hands. If you ask me, it is pretty cool.

The wedding in this movie takes place in a pagoda, in the middle of a field of chrysanthemum flowers. There is no way you will anticipate the ten-minute long fight sequence that immediately follows the beautiful wedding. I don’t know how cool one would find this but ask any Tollywood fan to list out movies with unforgettable weddings and Varudu comes first on the list.

Director Shankar’s Boys took the Tamil industry by a storm in 2003. Perhaps influenced by Alaipayuthey, Munna and Janani decide to get married in Tirupati with the support of their friends and a professor, who sing ARR’s Maangalyam Thandhunaneyna as they wish and bless them. Be it the nostalgia or Munna’s dialogue that follows, the wedding scene in ‘Boys’ is hard to forget.

Prem brings sindoor sent by his sister-in-law to the hospital ward where his fiancée, Poonam, is recovering from a fire accident. Prem declares, “Today is our wedding day. Give me one gift, Poonam. Give me all your pain,” and goes on to apply a streak of sindoor on her forehead. If you want to borrow material for your own wedding wows, just lift some of the beautiful lines in this scene!

In Bangalore Days, the song Thudakkam Maangalyam at the eve of the wedding between Divya and Das, kicks in the festive spirit right at the beginning of the movie and that very spirit is sustained throughout. The song became so popular that it became an integral part of not just Malayali, but most south Indian wedding ceremonies, raising spirits and getting everybody to tap their feet to its festive rhythm and catchy lyrics.

If you drew inspiration from these weddings, you might want to read: Ideas for an Indian Summer Wedding.

A guide to gifting jewelry for someone special

You Haven’t Experienced Incredible India Unless You Have Done These 10 Things
Arranged-Marriage Experiences: When a Potential Groom Comes Visiting
Comment