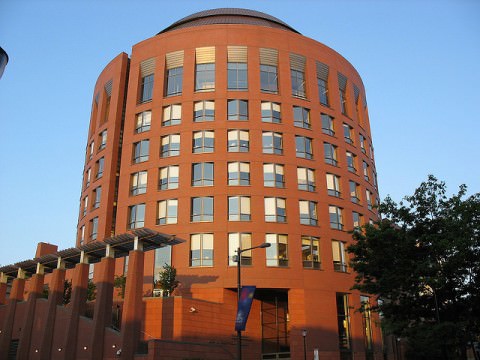 Last week, we noted that 25 out of the top 30 business schools in the US were named after an individual.  Here are profiles of 10 of them that raised the most money by selling the rights to their names.  Together, the money that they raised as part of their re-naming, amount to almost 1.2 billion dollars (in inflation-adjusted 2016 dollars).

On a global ranking by The Economist, Chicago Booth’s MBA program is current number one.  Booth School of Business is one among the M7, an informal group of seven elite private business schools said to have the world’s best MBA programs.  It offers courses such as Full-Time MBA, Evening MBA, Weekend MBA, and Executive MBA.  Additionally, Chicago Booth conducts research in various fields such as accounting, finance, economics, and quantitative marketing research.  International students make up a third of the total number of students at Chicago Booth.

UCLA Anderson School of Management offers  MBA, Financial Engineering, and Ph.D. programs.  According to reports published by US News and Businessweek, UCLA Anderson has one of the best business school programs in the US.

Stephen M. Ross School of Business is associated with the University of Michigan.  It was established in the year 1924, but got its present name only in 2004, after its alumnus Stephen M. Ross donated $100 million to the school.  Stephen M. Ross is the chairman and owner of  The Related Companies, a real estate development company.  At the time when this donation was made, it was the largest amount that was gifted to a business school in the US.

Ross’s BBA, MBA, and Executive Education programs are among the finest in the country and in the world.  32% of MBA students and 11% of BBA students at Ross are foreign nationals.  Ross also welcomes around 100 exchange students from various other countries.

The most-sought-after programs at Owen School are the two-year MBA program, the Executive MBA program, Master of Accountancy, and Master of Finance programs.  A unique feature about Owen School is their low student to faculty ratio, which at 9:1 is one of the best in the world.

Tepper School of Business was previously known as the Graduate School of Industrial Administration (GSIA).  It was founded in 1949 as Carnegie Mellon University’s business school.  In 2004, David Tepper, founder of Appaloosa Management, donated $55 million to the school.  He had earned his MS in Industrial Administration from Tepper, which was still known as the GSIA in 1982.  The school was later renamed David A. Tepper School of Business at Carnegie Mellon, to honor his generosity.

McCombs School of Business offers various undergraduate, Master’s, and doctoral programs in addition to executive education programs.  It is one of the top 25 business schools in the US.

The Kenan-Flagler Business School was established in 1919 as the Department of Commerce of the University of North Carolina’s Chapel Hill’s College of Arts.  It was renamed only in 1991 to honor two of its most important benefactors: Mary Lily Kenan Flagler and her husband Henry Morrison Flagler.  Over the years, the Kenan family has donated approximately $50 million to the University of North Carolina.

The Kellogg School of Management was founded in 1908 in downtown Chicago as Northwestern University’s School of Commerce.  It began as an evening program.  In 1976, the school expanded to its present main campus in Evanston, Illinois.  In 1979, John L. Kellogg donated $10 million to the institution.  Subsequently, it was named J.L. Kellogg Graduate School of Management.

Forbes ranks Kellogg at No. 3 and US News ranks it at No. 6 in their lists of the best MBA programs in the US.

Kellogg offers courses such as Master of Business Administration (MBA), MBA-JD, MMM programs, and Ph.D. programs.  The female student population is at a whopping 43% at Kellogg.

Walter A. Haas School of Business is one of the top ten business schools in the world, according to The Economist, Financial Times, US News & World Report, and Bloomberg Businessweek.  Haas School of Business offers full-time and part-time MBA and Ph.D. degrees, executive education, Master’s in financial engineering, and undergraduate programs.

Fuqua is one of the top business schools in the US and is currently ranked 8th according to a report by Bloomberg BusinessWeek.  Fuqua School of Business offers courses such as MBA, Executive MBA, Master of Management Studies, a Ph.D. program, and joint degree programs in law, forestry, medicine, environmental management, public policy, and nursing.

When J.B. Fuqua was young, he used to borrow books from the Duke University’s lending library.  He credited the university with helping him to develop an interest in business techniques.  Donating to the fund raising campaign was his way of giving back to the university.  While his $10 million contribution was the single biggest amount he donated, his donations to the university throughout his life amounted to approximately $40 million.

Not included in the above shortlist are the Wharton School at U Penn and the Tuck School of Business at Dartmouth College even though the naming donations they received were the highest ever to a US business at the time—$100,000 to Wharton in 1881 and $300,000 to Tuck in $300,00.

The reason for their exclusion: We don’t know of a way to adjust accurately for inflation prior to 1913!  Still, since the schools’ stories deserve mention, here goes:

Honorary mention #1. Wharton School of the University of Pennsylvania

Wharton Business School is the first business school to come up in the US.  Joseph Wharton, a wealthy industrialist was inspired by the idea to found a school that would help teach students about the nuances of developing and running a business.  He donated $100,000 to the University of Pennsylvania and thus began the story of Wharton School of Finance and Economy.

Both Business Insider and QS have ranked Wharton’s MBA program No. 1 in the world.  36% of Wharton’s students are foreign nationals.  Notable alumni from Wharton include Elon Musk, Anil Ambani, Sunder Pichai, Warren Buffet, and Donald Trump.

In the early 1900s, the idea to build a school of business arose in the mind of Dartmouth College president, William Jewett Tucker.  He approached Edward Tuck, a wealthy banker whose father Amos Tuck had been an alumnus of Dartmouth.  Edward Tuck donated the capital to found the school in the form of stock shares amounting to $300,000 dollars.  The institution went on to become the first in the US to offer Master’s degrees in business administration.  The institution was known as Amos Tuck School of Administration and Finance after it was founded.  It was renamed Amos Tuck School of Business Administration in 1953.

The business school of Massachusetts Institute of Technology is called MIT Sloan School of Management.  Sloan is renowned for its full-time MBA course.  The school offers MBA and Executive MBA programs in addition to undergraduate courses in management science.

A tidbit: MIT Sloan played a key role in founding the first Indian Institute of Management in Calcutta, back in 1960.

The Greatest Sports Critique Ever Published at 2:38 a.m.