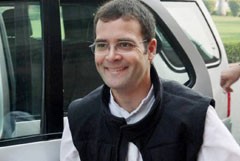 Inspired by the Church of Scientology’s auditioning actresses to be Tom Cruise’s girlfriend, the Congress Party embarks on a search to find Rahul Gandhi a bride.

Vanity Fair broke the news recently about the Church of Scientology’s having auditioned member actresses some years ago to be Tom Cruise’s girlfriend.  The story had barely begun to die down when word got out that the Congress Party has embarked on a similar drive to find Rahul Gandhi a bride.  As one party elder put it, “Gone are the days when you could say that you are celibate in service to the nation.  This is kalyug!  If you are in the public eye and not married, the public assumes you are gay.  That may work in America, but in India, it is not good for your electoral chances!  Besides, it is Sonia Madam’s wish that before our Rahul Baba is crowned prime minister, we should find a Sati Savitri to take a seat beside him on his rightful throne.”

Following intense deliberations, the committee presented Sonia Madam with a list of Top 10 criteria for an ideal Gandhi bahu.  Let it be said, you saw it here first!

10. She must be well versed in modern Indian history.  (Rahul Baba’s father is Rajiv Gandhi, whose father is Feroze Gandhi, who is unrelated to the father of the nation, Mahatma Gandhi.)

9. She must know Hindi or, like Sonia Madam, have the ability to master new languages as an adult.  (Rahul Baba likes to talk to aam aadmi in Hindi and can’t have his wife wondering whether he’s talking to Mango Man!)

8. She must be “convent-educated” and know that a diphthong isn’t some thong dipped in water.  (Rahul Baba is Raul to near and dear ones, and we can’t have anyone butchering his pet name!)

7. She must love Italian food and know how to pronounce it.  (Rahul Baba is half-Italian – duh! – and loves ordering pizza.)

6. She must be strong enough to carry a heavy duffel bag while travelling.  (We don’t talk about it much, but Rahul Baba does not like to check baggage at airports.)

5. She must have the ability to remember routes and schedules of local trains.  (Rahul Baba likes to ride them on a whim, and even his handlers often can’t keep up.)

4. She must be able to ride a motorcycle.  (Rahul Baba likes to ride pillion as he visits aam aadmi.  See also, Hindi requirement above.)

3. She must not be a fan of high heels.  (Rahul Baba likes to go on padyatras, also known as long, meandering walks across varied, uneven terrain.)

2. She must be a practitioner of yoga.  (Rahul Baba likes to show up unannounced for dinner at modest Dalit homes, and his wife can’t show discomfort while sitting cross-legged on the floor.)

1. She must stay away from modeling for towels.  (The last Gandhi bahu who did that didn’t quite get along with her saas, and Rahul Baba’s relationship with his mother is important to him.)

This blog post first appeared in The Unreal Times.

Image courtesy of The Unreal Times.

We also heard that things aren’t so well between President Obama and the First Lady.  Read about it here: Obama Divorce Rumors and Desi Dreams.

10 ways for professionals to unwind