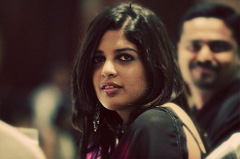 The bridegroom hunt gets more comical, as the potentials and their potentiality get tested by the families and me.  Here’s an account of an encounter I had with a prospect.

Clearly, there are better things to do with one’s time than to sit around and wonder if you’ll ever meet Prince Charming.  You could, for instance, read a good book or watch TV.  However, these activities are on some groom-finding blacklist, because being disinterested means messing with the universe and its master plan for you.  I have been told, in many instances, not to mess with the universe.

Many months after meeting a Mr. Eyebrows, I was told that a long-forgotten proposal was back in the reckoning.  Why?  Because I was now older (24) and hopefully wise enough to make the “right choice” and settle down.  So, the groom comes to my city on a sultry July day to meet me, while I am sitting in a corner someplace, reading a book.  I wish I were reading something contextual so that I could quote lines from it, but it was something rather mundane and sadly, irrelevant to the events unfolding outside my room.

By the time encounter number two had materialized, I told my parents that they were not to make me serve people juice.  I don’t see the point in making eye contact with someone, especially since I don’t come under the “doe-eyed beauty” category.  But, as it turned out I had to give him juice anyway.  We smiled at each other.

The family moved on to the dining room to eat and drink and be merry and we had to sit in the living room and talk and be socially appropriate.  He asked me about my job.  For once, someone was interested in journalism and was not being snide about it, so I was a little too over-enthusiastic in my attempt to make him understand my job.  Things were less awkward than the last meeting with a prospect, so I was comfortable.

It was time for him to leave and my family was pretty sure that this was it.  It wasn’t.  Off he went to Delhi, to work, to try and meet my younger brother in the hope of getting his approval also, and that’s when the situation went to the next level—phone calls, emails and chat.

Living in today’s world, it’s impossible not to be connected to people in some way or form, and this interaction I had with this one person on the phone, via email, was all over the place within my network.  There were phone calls on when my wedding was going to be fixed.  Relatives from other parts of the world had magically been informed of this proposal and were already talking of trips to the homeland.  There was too much pressure to say yes and too much pressure to be “in love” with this guy.

There is nothing wrong with him.  He likes to travel, thinks reading is a good thing and believes that writers are not crazy people.  However, he also is an ardent practitioner of yoga and at some point wants to live a more spiritual life, without worldly pressures.

Since I plan on inhabiting the real world until the day I die, a spiritual seeker is definitely not someone I can foresee a future with.   Relationship surveys talk of deal breakers.  For me, certain life choices are deal breakers and in this instance, an almost-got-married-to-him situation was saved by this guy’s life choice.  Good for me.

The funny thing is, those of my relatives who knew that this proposal had come my way a second time around, were convinced that this was some movie plot enacting itself off-screen, that I was going to be giddily happy and everyone would get the chance to talk about fate and its mysterious ways.  Sadly, that was not meant to be.

Things were quiet for a year, and then something entirely different happened.

Editor’s note:
For other parts of this six-part Kalyanam Chronicles series, click on the links below.

A Marriage With No Dowry
The Kalyanam Chronicles: Meet the Prospects
Comment

30 Everyday Acts of Kindness That We Can All Practice