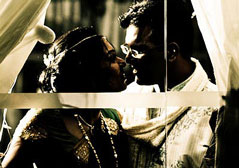 Avi’s heart skipped a beat or two when Aarti entered the hall.  Tall and slender, Aarti was wearing a plain, light-blue Ahimsa silk sari.  Her head was partially covered by a long, dark-blue scarf with heavy embroidery.  The scarf was hanging freely by her side.  Light makeup on her eyes and cheeks enhanced her beautiful facial features.  He knew that she was attractive, but he had not imagined her looking this gorgeous.  Suddenly self-conscious, he took a quick look around the room to see whether anybody caught him eyeing her.  Still, he couldn’t keep his gaze away from his bride.

It was the night of Avi and Aarti’s engagement ceremony. The wedding was to take place in another two days.  Barely a year ago, Avi had been a carefree bachelor.  He was only 26 then and not thinking of getting married anytime soon.  Yet, his thoughts on marriage changed quickly when he noticed this simple yet elegant young woman happily participating in the festivities at his cousin’s wedding.  He had been aware that weddings are fertile hunting grounds for families looking for prospective brides and grooms and wondered whether he might be set up.  Yet, as he learned that a match between him and Aarti was being explored, he didn’t protest.  As he came to learn more about Aarti, far from protesting, he couldn’t wait to tie the knot with her!

They would have been married by now, but for an unfortunate incident that led to the wedding’s being put off indefinitely.  It terrified him that Aarti had wanted to call off the wedding altogether.  However, he was relieved when things got back on track between them.  With Aarti now seated beside him at their engagement, nothing else mattered.

How he had been looking forward to this day.  As he turned towards her, their eyes met.  Her skin was glowing and she was smiling, but something was missing.  Instantly, he knew that something was bothering her.  He wished he could get a few minutes with her in private.  He wanted to tell her about the e-mail he had received earlier in the day. He looked around at the thirty or so relatives around them – some sat passively, while others hovered like watchful eagles.  Aarti gamely kept up conversation with them.  Occasionally, Avi would come up with diversionary tactics to disperse a few of them, but others would immediately take their place.  Try as he might, he just couldn’t get a quiet moment with his sweetheart.

Before long, Avi’s mother stepped forward with the rings.  It was time for the exchange of rings, and all the guests gathered around the couple.  Cameras flashed and clicked all over.  Everybody was in high spirits and cheered merrily.  When prompted, Aarti extended her right hand forward.  Avi looked at her beautifully manicured but henna-less hand.  He was reminded of their first interaction at his cousin’s wedding.  She was jumping with joy and showing off the dark henna on both her palms.  When Avi quizzed her about her excitement, she bashfully answered, “The darker the color of my henna, the deeper will be my husband’s love for me.”  She couldn’t have imagined at the time that she was talking to her future husband.

Avi smiled and gently held her right hand in his hands, before slipping the shiny ring around her long, thin finger.  People showered the couple with flowers as Aarti also placed a ring around Avi’s finger.  The elders then directed them to feed each other sweets.  He saw in it the blessing, “May you always have sweet words for each other!”  With the rings exchanged, people began drifting almost as if on auto-pilot towards the inviting food counters.

Aarti and Avi were then escorted by their parents to a special stage on the lawns, where they were seated side-by-side on stately chairs.  A large table bedecked with flower petals lay in front of them, the white tablecloth matching the groom’s sherwani and the petals, the bride’s scarf.  The young couple finally seemed to have a moment to themselves.

As they waited for the wedding guests to begin greeting them individually, Avi cautiously slipped his hand under the table and began caressing Aarti’s hand.  She smiled nervously, but didn’t see the need any more to pull her hand away.

Their eyes met, when Avi noticed a tear drop slide down her cheek.  Her embroidered scarf also slipped and she instinctively raised her other arm to re-set it.  Her look changed to horror as she realized that she was about to expose her amputated arm.  It had been almost a year since she lost her left hand in a freak accident, but she hadn’t fully come to grips with the situation.

Avi instantly reached forward and adjusted her scarf.  He also lovingly comforted her as he draped the scarf back over her left arm.  “I’ve been meaning to tell you all day,” he said.  “I heard from Touch Bionics today – the prosthetic limb is ready!  In two days, we are flying to Scotland for the fitting.”  More tears flowed from Aarti’s mascara and liner-laden eyes and Avi gently wiped them with his fingers.  “In sickness and in health…,” he whispered as he got closer to her, reminding her of their promise to each other.

While true love does exist, read about how it is almost always portrayed in Indian movies: How Love Blossoms In Indian Movies.

On Being Married: Point and Counterpoint
I See God in You
Comment

Ever Wondered How Bollywood Actresses Get Their Gorgeous Hairstyles and Stunning Hair Flicks?

10 Tips on Staying Safe While Running